Conversational programming has always been a great choice for getting jobs up and running quickly, and for very efficient programming of 2D and 2.5D contours and features. However, machining actual 3-dimensional surfaces required the use of a CAD/CAM software package…that is, until now!

Hurco has recently released a new capability for the very popular 3D IMPORT option of the WinMax control. 3D IMPORT allows the user to program conversational blocks from a variety of drawing files, including .STP solid models. By simply clicking features on the model, the user can create conversational blocks to create the program and machine the part. This was a real game changer for shops whose customers only provide them with solid models of their parts, and therefore who don’t receive paper prints. As design software became more and more prevalent, this “solid model only” scenario grew and caused many shops who otherwise loved conversational programming to find other programming alternatives – even for the simplest of work. Without paper prints at the machine, it makes conversational “shop floor” programming very difficult. The release of the 3D IMPORT option addressed most of the issue for these shops, but there was still a need for offline programming for surfacing or true 3D contour work. Now, with the new Mill Surface feature of 3D IMPORT, these shops have a new conversational option for programing almost all their work.

The Mill Surface feature of 3D IMPORT is an included capability within the overall option, and nothing separate or additional is necessary to purchase or install. Any existing users of older versions of 3D IMPORT can simply update their control software to utilize this new standard feature. The new feature even allows you to program a tilt angle of the tool for 5-axis machines. By simply clicking on the handles attached to the coordinate shown below, you can manually drag it to the desired tilt angle, or enter a value in the provided A, B, or C fields at the bottom of the screen.

For many years Hurco has offered an easy conversational solution for programming simple 3D geometries, at the control, without the need for expensive CAD/CAM... 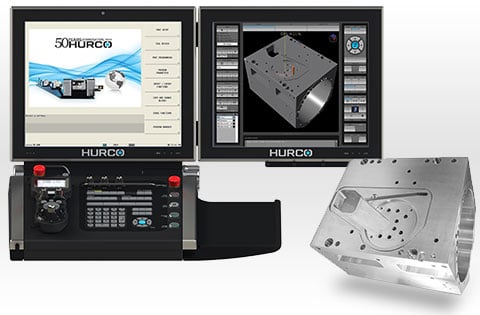 The most frequent request we have received from customers over the past decade or so, has been for the ability to import a solid model directly into the CNC control and...