(INDIANAPOLIS) May 15, 2020 – Ed Carpenter Racing and the U.S. Air Force are proud to unveil Conor Daly’s No. 47 U.S. Air Force Chevrolet for the 2020 Indianapolis 500. With the same attention to detail and historical accuracy used to design his road and street course car, Daly's Indianapolis 500 entry pays homage to the beginning of today’s U.S. Air Force and one of its most iconic aircraft, the Bell X-1.

While Daly's road and street course car carries the No. 20, team owner and oval driver Ed Carpenter will step back into that entry for the Indianapolis 500. The No. 47 was selected for Daly's car with double significance. The U.S. Air Force was officially founded on September 18, 1947 with the passage of the National Security Act of 1947. That legislation would separate the U.S. Air Force from the U.S. Army and allow the U.S. Air Force to become a separate branch of military service. Less than a month later, on October 14, 1947, an experimental U.S. Air Force rocket plane became the first crewed aircraft to exceed the speed of sound.

Flying the Bell X-1, U.S. Air Force Capt. Charles "Chuck" Yeager became the first pilot to break the sound barrier. The aircraft was painted bright orange so it could be seen in test flights and named “Glamorous Glennis" by Yeager as a tribute to his wife. The aircraft reached Mach 1.06 (700 mph) at an altitude of 43,000 feet over the Mojave Desert in California. The Bell X-1 is now owned by National Air and Space Museum and is on display in Washington, D.C.

"It's incredible to once again drive an iconic livery at the Indy 500. The U.S. Air Force does an unbelievable job paying respect to the history of the fighter jet and honoring the accomplishments of those who have served and are currently serving," stated Daly. "This is such an exciting car, there's so much that went into both the design and the number 47 that we'll be representing. I can't wait to drive the Indy car version of Glamorous Glennis and hopefully make Chuck Yeager himself proud!"

Maj Ross McKnight echoed Daly's excitement. “The Bell X-1 and Brig Gen (Ret) Chuck Yeager are cornerstones of the Air Force and aviation in general. They are part of a rich history of high performance, pushing boundaries and advanced technology that are at the fabric of the U.S. Air Force and our Airmen!” said Maj McKnight, Chief, National Events Branch Air Force Recruiting Service. “We are really excited to pay tribute to the historic ‘breaking of the sound barrier’ at the Greatest Spectacle in Racing with a tribute livery that can be seen all round the track. Even if it can only go a fraction of the speed that Chuck and the Bell X-1 traveled, then Conor and No. 47 U.S. Air Force Chevy are in for a great result.”

Daly and the U.S. Air Force are continuing a partnership that originated three years ago. The Noblesville, Ind. native and Indianapolis-based Ed Carpenter Racing work alongside the U.S. Air Force to use Indy car racing to inspire young adults, communicate the service’s mission and build awareness about career opportunities. Daly will be attempting to qualify for his 7th Indianapolis 500 in 2020. Last year, he had his most successful Month of May to date by setting the fastest lap all practice sessions earning career-best “500” finish of 10th.

The 104th Running of the Indianapolis 500 was originally scheduled to run on May 24, 2020. Due to the COVID-19 pandemic, the event has been re-scheduled to August 23, 2020. ECR's three-car lineup for the 500-mile race will feature Daly, three-time Indy 500 pole winner Carpenter and rookie Rinus VeeKay, the team’s full-time driver of the No. 21 Chevrolet. Following a three-month delay, the NTT INDYCAR SERIES season is currently scheduled to begin on June 6, 2020 at Texas Motor Speedway. 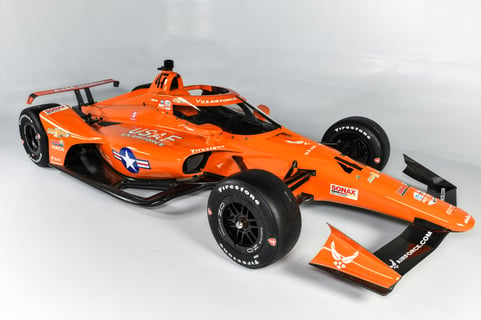 Ed Carpenter Racing (ECR) first entered the NTT INDYCAR SERIES in 2012. The Indianapolis-based race team has proven its versatility by collecting seven wins across each type of track the series competes on – street and road courses, short ovals and speedways. ECR is led by IndyCar’s only team owner/driver, Ed Carpenter, three-time pole winner for the Indianapolis 500 (2013, 2014 and 2018). The 2020 season will see Indiana natives Carpenter and Conor Daly in the No. 20 Chevrolet as Carpenter will drive the ovals and Daly will take over for the road and street course events. Both will be entered in the Indianapolis 500 alongside Dutch teenager Rinus VeeKay, who will compete for the Rookie of the Year title as he races the No. 21 Chevrolet for the full season. More information on Ed Carpenter Racing may be found at http://www.edcarpenterracing.com/.

About the U.S. Air Force

The mission of the U.S. Air Force is to fly, fight and win in air, space and cyberspace. For 2020, Air Force Recruiting Service is hiring over 30,500 new Airmen. An emphasis is on recruiting people with no prior military service into one of about 140 enlisted career opportunities. The Air Force recruits the brightest candidates possible, then provides them with tough, highly technical training that gives them the right skills to sustain the combat capability of America’s Air Force. For more information about Air Force benefits and opportunities, go to http://www.airforce.com.