Earlier this year, I reviewed the results from the Benchmarking Report by Modern Machine Shop called TOP SHOPS and promised to give you an update when the 2013 results were published. This blog post only touches on a fraction of the information contained in this incredibly extensive report—the Executive Summary alone is 22 pages—so I encourage you to explore Modern Machine Shop’s TOP SHOPS ZONE

About the Top Shops Report

Steve Kline, Jr., the Research Analyst for Gardner Publishing (publisher of Modern Machine Shop and other trade magazines), started the Top Shops benchmarking report three years ago as a way for shops to compare themselves against other shops using Key Performance Indicators (KPIs).

According to the report’s authors, “The goal of our Top Shops benchmarking program is to identify optimal shopfloor practices as well as operational and business metrics that define world-class competitiveness in discrete parts manufacturing. It enables companies ranging from mom-and-pop shops to large, captive operations to compare their performance against North America’s leading machining businesses and consider what changes they might make to emulate those top performers. Not only does the benchmarking data serve as a baseline “report card” of sorts, but it eliminates the need to rely on gut feelings as a fundamental method of identifying and prioritizing improvement efforts.”

Overview of the Survey Used to Create the Top Shops Report

Breakdown of 2013 Respondents by Company Type

The survey asks numerous questions about business performance. Please note: the charts illustrate Median values instead of Mean (average) values to give a clearer representation of the data. To see the data as averages, access the TOP SHOPS ZONE at the Modern Machine Shop website. 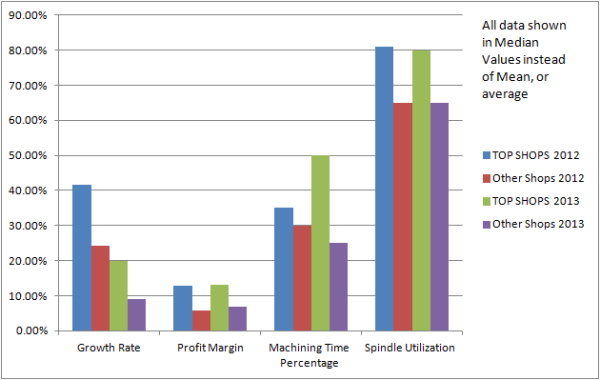 Therefore, it’s important to note that the 2012 growth rates are much higher because the formula is comparing growth from 2010, a recession year, to 2011.

The profit margin is reported as net income divided by gross sales x 100.

What I think is most interesting about this data is the fact that the profit margin has stayed relatively the same for Top Shops (12.9% and 13%) whereas Other Shops have increased their profit margin from 5.9% in 2012 to 7% in the 2013 report, which is essentially an 18% increase.

Machining Time Percentage is calculated by dividing the amount of time that the part is being machined by the order lead time. Ultimately, a higher percentage denotes efficiencies in the work flow of each job.

Spindle Utilization Time is the in-cut time as a percentage of machine up time. 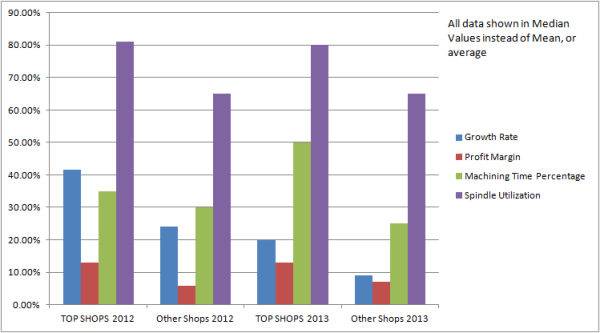 This chart show the same data discussed above, but with the axes switched so you can compare year to year for TOP SHOPS versus Other Shops.

What’s the Secret to Success? 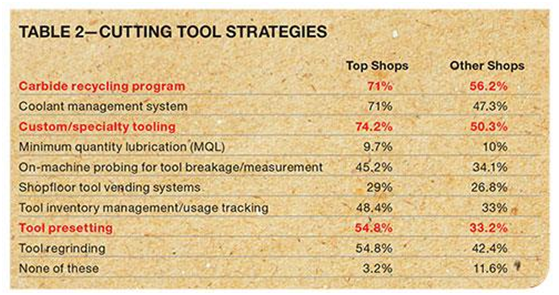 Modern Machine Shop has a great article about applying improvement methodologies in a high-mix/low-volume environment “From Job Shop Chaos to Lean Order.” The article explains how a job shop clustered certain machines together by grouping parts that share similar routings into potential process families.

Even though it first appeared that Top Shops and Other Shops spent similar amounts on capital equipment, the authors of the TOP SHOPS Benchmarking Report said when they evaluated the amount of capital equipment spending per gross sales, it was clear that Top Shops spend much more of their revenue on machine tool technology—10% median and 13% average for TOP SHOPS compared to just 2% median and 6 % average for Other Shops.

“The data is similar to our last two surveys, demonstrating that Top Shops continually make significantly larger investments in the latest machine tool technology,” according to the TOP SHOPS Executive Summary," according to the report's authors.

Types of Machines TOP SHOPS Use More Than Other Shops

Top Shops have a higher percentage of Horizontal Machining Centers (61% of Top Shops vs. 44% of Other Shops) and 42 percent of the TOP SHOPS take advantage of multi-face tombstones, which allows one HMC to achieve the productivity of two or more VMCs, according to the authors. Due to the number of tools HMCs hold versus VMCs, the HMCs can accommodate a higher number of jobs without changing/adding tools. Modern Machine Shop has a great article in their February 2013 issue “Worth Three Machines,” where a shop determined its new HMC delivered productivity comparable to three VMCs.

The percentages are quite different this year compared to last year’s survey for the percentage of TOP SHOPS using mill turn multi-tasking centers—nearly 50% last year and just 29% this year. I’m curious to know if our blog readers have any idea why that percentage would drop so much?

At Hurco, we’ve focused an enormous amount of our resources on 5-axis technologies because we think it’s the most expedient way for shops to increase profitability—especially in the “high mix/small batch” world in which many of our customers operate. The idea is to significantly decrease setup time by using 5-sided (or positioning only) on existing parts with the opportunity to bid on higher margin Simultaneous 5-Axis (or full contouring) jobs when you’re ready. From this year’s Top Shops report, it appears all shops are increasing their investment in 5-axis machining centers, but TOP SHOPS continue to have a higher percentage of these machines and continue to grow the Full Contouring 5-Axis part of their business. 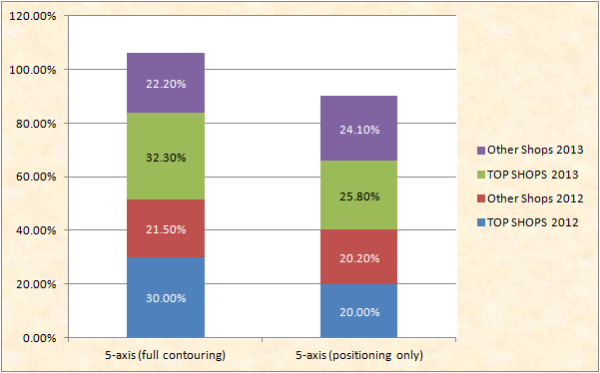 If you still haven’t made the leap to 5-axis, check out FiveAxisMachining.com, an educational website sponsored by Hurco that has lots of resources to get your started. One of the most popular resources is the interactive worksheet that lets you easily evaluate whether you can increase your profit margin on existing parts by switching from 3-axis to 5-axis positioning (or 5-sided machining).

Similar to 5-axis machining technology, Top Shops have invested in High Speed Machining more than Other Shops. As the graph illustrates, more Top Shops run Lights Out (41.9%) than Other Shops (23.5%). According to the research report's authors, “What’s interesting is that survey data shows these advanced processes are not limited to very large operations. For example, nearly half of shops with fewer than 20 employees perform high speed machining. Likewise, more than 21 percent of shops with fewer than 20 employees have established lights-out processes, compared to 36 percent for shops with more than 250 employees.” 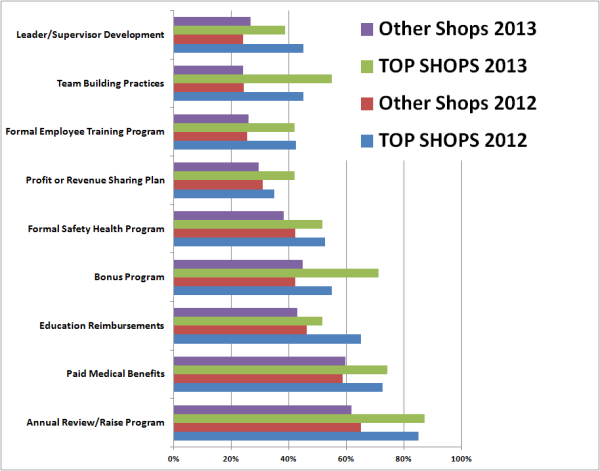 At all levels, it appears the companies deemed Top Shops continually invest in their business—their employees, their equipment, and improvement programs.

As a reminder, this article just touches on the information I found most interesting. To find out more, go to the Top Shops Zone. Modern Machine Shop also created a Top Shops LinkedIn group. According to the publication’s editors, “This exclusive group—now with more than 1,000 members—is for decision-makers in North American machining facilities. We’ve tried to keep the group solely for machine shop personnel by letting in only those who seem fit that description. The exclusivity is part of what makes this group different and valuable, but what really makes it valuable is your participation in it.”

Thanks to Modern Machine Shop, Gardner Publishing, and the report's sponsor, AMT, for this valuable resource!

Hi Hurco Blog Readers. Mike Cope has been on the road quite a bit so I'm filling in as a guest writer for his blog. 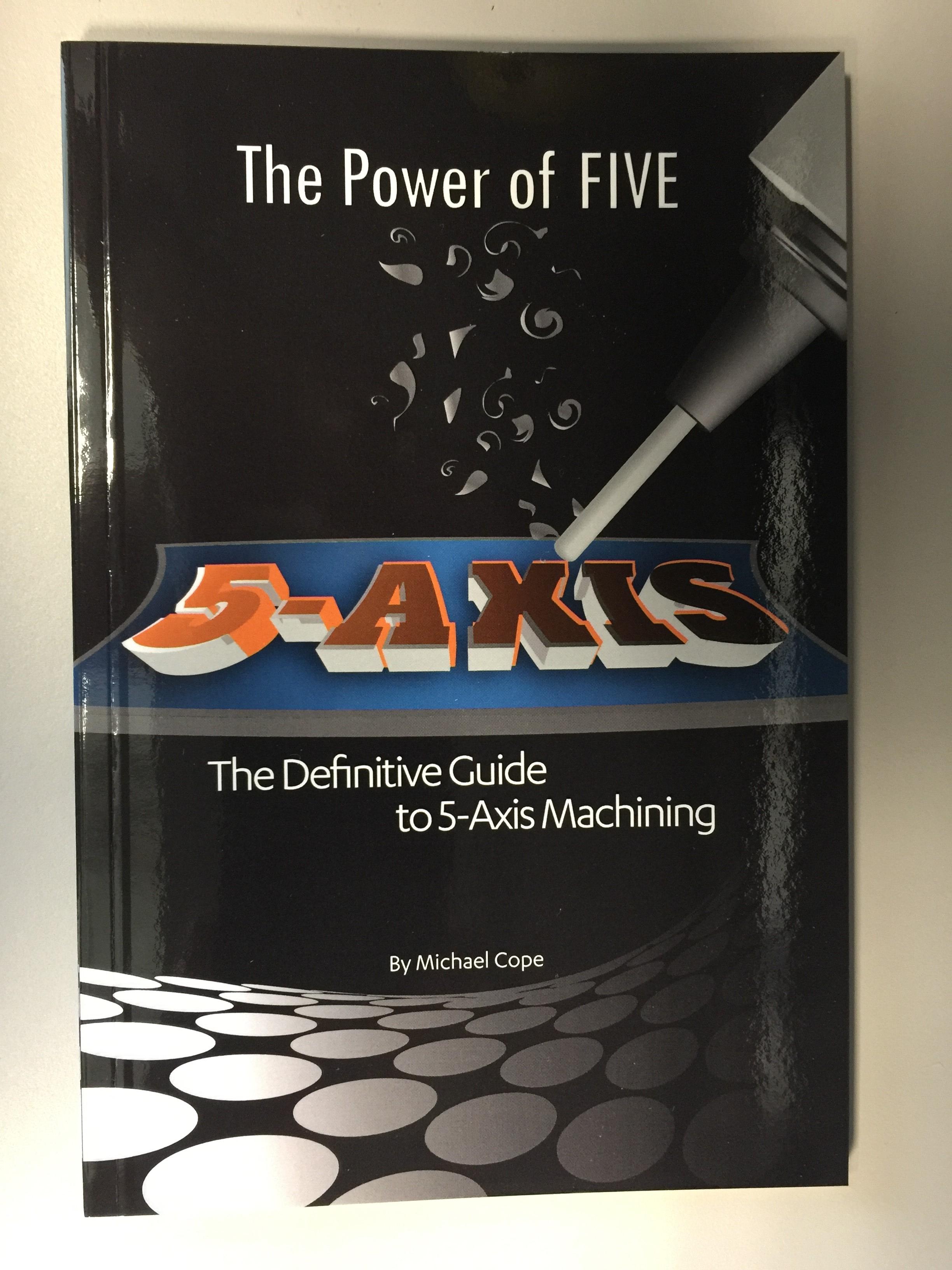 Well I’m just too excited about this not to share this news with my readers. With the help of Hurco Companies, I just recently published my very first actual book! It is...