I couldn't let the month of October end without acknowledging our 45th birthday...it was October of 1968 when Mr. Roch asked Mr. Humston if he wanted to start a shop. Hurco co-founder, Gerald V. Roch, inventor of CNC and conversational progamming, sat down with me so I could document our company's founding…and he didn't "sugarcoat" it. He talked about failed product launches, financial challenges, and the times he feared the company would fold. During the coming weeks, we will post different parts of the interview with Mr. Roch. To skip the blog article and go straight to the video, scroll to the bottom!

During the conversation with Mr. Roch, three things struck me...

The Gift of Failure

I've always heard "you have to fail to succeed" but I'm not sure I completely understood the purpose of failure...I thought failure was a vehicle to learn from your mistakes and get smarter. From Mr. Roch's experiences, I realized the true value of failure: it tests your will...it tests your drive to never give up...to keep going until you to get it right. As any business owner knows, the entrepreneurial pursuit is not for the faint of heart.

The world of product and technology innovation isn’t without glitches—as with Mr. Roch’s first AutoBend product when the gages wouldn’t track parallel and the first Compu-Cut that wasn’t powerful enough.  He always took responsibility and made it right for his customers. But he never quit. Setback after setback, failure after failure, Mr. Roch always kept moving forward to find a solution and bring the next big idea to market.

How Mr. Roch Shaped the Culture at Hurco
During our conversation, I realized how much Mr. Roch's leadership during the first 17 years shaped Hurco's current culture. To me, a company’s culture is more of a feeling than a factual definition…it’s a vibe, a sense of purpose, priorities, a mission, maybe even a personality. While interviewing Mr. Roch, I realized how his leadership and experiences—both the successes and the failures—have shaped our culture here at Hurco. For example, all of us at Hurco, even those of us who had never stepped foot in a manufacturing facility prior to working here, have an incredible level of respect for machinists, the work they do, and the companies they have built. And it's not just a "respect your customer" corporate thing...we have a deep appreciation of the skill and expertise it takes to be a machinist and the courage it takes to throw away the safety net of a steady job and start your own business in pursuit of the American dream.

Mr. Roch’s passion for machining and his entrepreneurial spirit, characteristics shared by our customers, have become an integral part of our culture. I believe the admiration and respect we have for our customers is due to Mr. Roch’s influence. He grew up around his grandfather's machine shop, working there during summers as a kid, and later full-time when the company had grown and added new partners.

Another attribute Mr. Roch contributed to the culture of Hurco is the old-fashioned work ethic. The first thing I noticed when I arrived at Hurco seven years ago was the industrious nature of this group of people—people who take pride in their work, have a strong work ethic, and enjoy working in general.

Our culture was also shaped by the challenges Mr. Roch faced many times in the early years: namely, the financial challenges.

During the last decade, Hurco has become a company that is financially secure. Our current CEO, Mr. Michael Doar, created a strategic plan to ensure profitability and financial responsibility by controlling non-product expenses and increasing supply chain efficiencies. Fortunately, Hurco’s strong financial position has allowed us to continue inventing new products and technologies during the worst of economic times. Mr. Doar’s strategic plan also focused on targeted expansion of both new markets and new products, which helps us continually focus on what matters: inventing new products and technologies that help our customers increase productivity and profitabilty.

The Power of Story

When my son (who is part of the millennial generation that supposedly has the attention span of a gnat) saw the video footage of my interview with Mr. Roch, he watched, he listened, and then pondered, "I wonder why old people are so good at telling stories?" After I gave him better alternatives for the word "old"...like experienced, seasoned, mature...I told him I thought maybe it's because once "experienced people" enter that next life stage and slow down a little, they have more time to reflect and package those experiences into stories that teach so many lessons in an entertaining way. I'm just hoping it's a hidden benefit of aging that I will acquire!

As we embark upon the next 45 years, all of us at Hurco are so appreciative of the strong foundation Mr. Roch created and we work each day to fulfill his dream of creating products that make manufacturing more efficient. I hope you enjoy the video and I will notify you when the sequels are released! 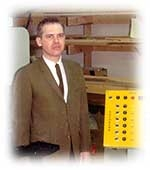 If you're a regular reader, you're up to speed about the interview I conducted with Mr. Roch, co-founder of Hurco (you can scroll down to this week's video and skip...

Hurco is well known for our powerful and easy to use conversational software; and for 2D and simple 3D geometries, the WinMax conversational control simply can’t be...